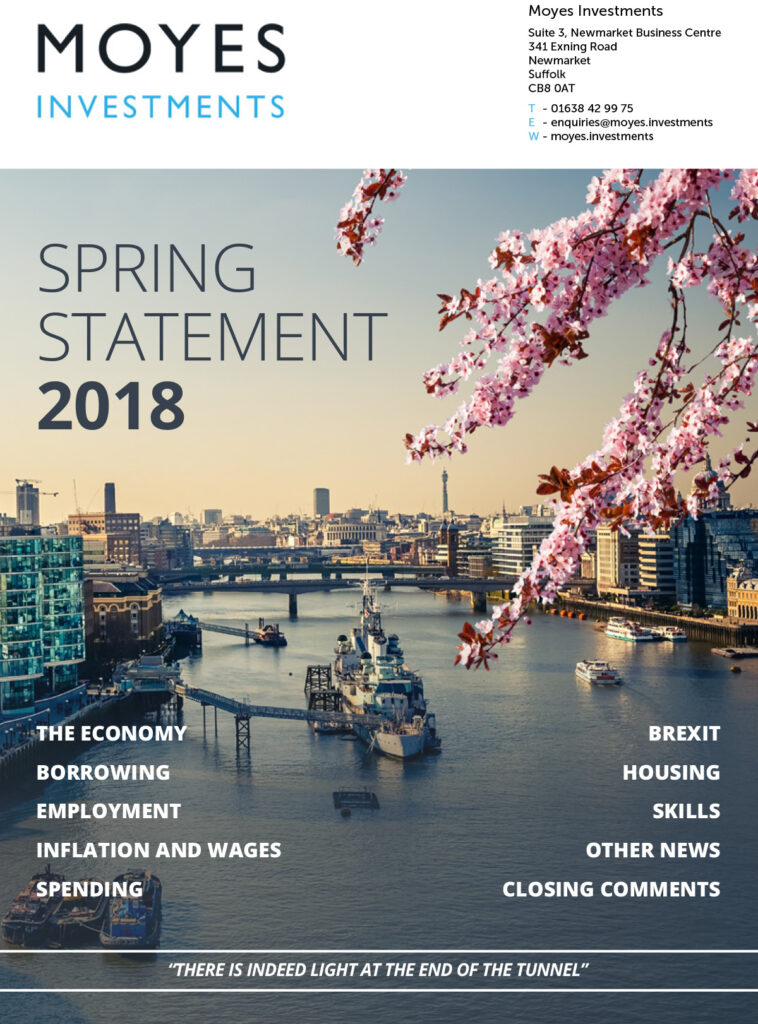 “THERE IS INDEED LIGHT AT THE END OF THE TUNNEL”

Philip Hammond, the Chancellor of theExchequer, stood up in Parliament at 12.34pm on Tuesday 13th March, to deliver his first – already heralded as ‘slimmed down’ – Spring Statement.

He had forewarned the media and Parliament that he would not be making any specific tax or spending changes. These, together with any new governmental policy moves, must wait until his Autumn Budget. He addressed a surprisingly busy chamber. Updating Parliament on the latest available economic forecast data from the Office for Budget Responsibility (OBR), he reflected on their previous report, from November 2017.

Given these encouraging growth figures, the government’s borrowing requirement is now forecast lower at £45.2bn for 2017/18, down from the previous figure of £49.9bn, though not as large a fall as had been projected in the media.

He did, however, stress that he would, “Deliver a balanced approach” (to debt).

Mr. Hammond lauded the fact that “forecasts are there to be beaten…and we should make it our business to do so again.”  He took this opportunity to emphasise that he was extremely bullish about the economy’s prospects looking forward, stating, “Our economy will remain open and outward-looking, confident to compete with the best in the world.”

He believes that boosting UK productivity generally is the foundation to increasing overall living standards across the nation, and helping to create a thriving economy. The fundamentals of a market economy “embraces talent and creates opportunity.” Inflation and Wages CPI inflation, previously forecast by the OBR at 3%, is expected to fall back to target (2%) over the next 12 months and real wages will grow again by the first quarter of 2018/2019. The National

On the spending front, the Chancellor confirmed that in 2018/19 governmental day-to-day spending will be in surplus and that the national debt would peak at 85.6% of Gross Domestic Product (GDP) in the current financial year, before falling to a forecast 77.9% in 2022/23, thus marking the “light at the end of the tunnel”.

He took this opportunity to emphasise that he was extremely bullish about the economy’s prospects looking forward, stating, “Our economy will remain open and outward-looking, confident to compete with the best in the world.”

Turning to the Brexit negotiations, amid raucous barracking from the opposition benches, the Chancellor said that “since the Budget we’ve made substantial progress in our negotiations with the European Union to deliver a Brexit that supports British jobs, businesses and prosperity.” Warming to his theme, he added, “But we will continue to prepare for all eventualities and today… the Chief Secretary is publishing the departmental allocations of over £1.5bn of Brexit preparation funding for 2018/19.”

The focus turned to housing, as he stated that since the government’s introduction of Stamp Duty relief offered to firsttime- buyers, over 60,000 have benefited. On the broader housing front, he said that the government had agreed a deal with the West Midlands region for them to build 215,000 new homes by 2030/31, aided by a grant of £100 million from the Land Remediation Fund, as part of a £44bn investment programme announced in November.

Meanwhile, the Housing Growth Partnership, set up to provide financial funding for small housebuilders, will be doubled to £220 million, whilst London would receive £1.7bn of additional funding to deliver a further 26,000 affordable homes.

Business skills are crucial to success, so, adding to the £500 million a year for T-Level students’ education previously outlined, from next month, an additional £50 million will be available to help employers prepare to offer work opportunities for these students.

Turning to apprenticeships, the government are committed to delivering three million new apprenticeship opportunities across the nation by 2020 and up to £80 million of funding will be on offer to help smaller businesses to engage apprentices.

He said that, “We are the party of small business and the champion of the entrepreneur.” The government are determined to find ways to help businesses plagued by late payments, often described as a “scourge.” However, he did not elaborate beyond initiating a Call for Evidence.

In a bid to tackle the plastic issue, the Chancellor has called for evidence on using the tax system or charges to address singleuse plastic waste. Any such money raised through taxation would be used to encourage new greener products and services to address the problem.

The Chancellor signed off his first Spring Statement with these words, “As we build our vision of a country that works for everyone.

An economy where prosperity and opportunity are in reach of all. Wherever they live. Whatever their gender, colour, creed or background. Where talent and hard work alone determine success.

A beacon of enterprise and innovation. An outward looking, freetrading nation. One that is confident that our best days lie ahead of us. A force for good in the world. A country we can all be proud to pass on to our children.”

Information is based on our understanding of taxation legislation and regulations. Any levels and bases of, and reliefs from, taxation are subject to change.

Tax treatment is based on individual circumstances and may be subject to change in the future.